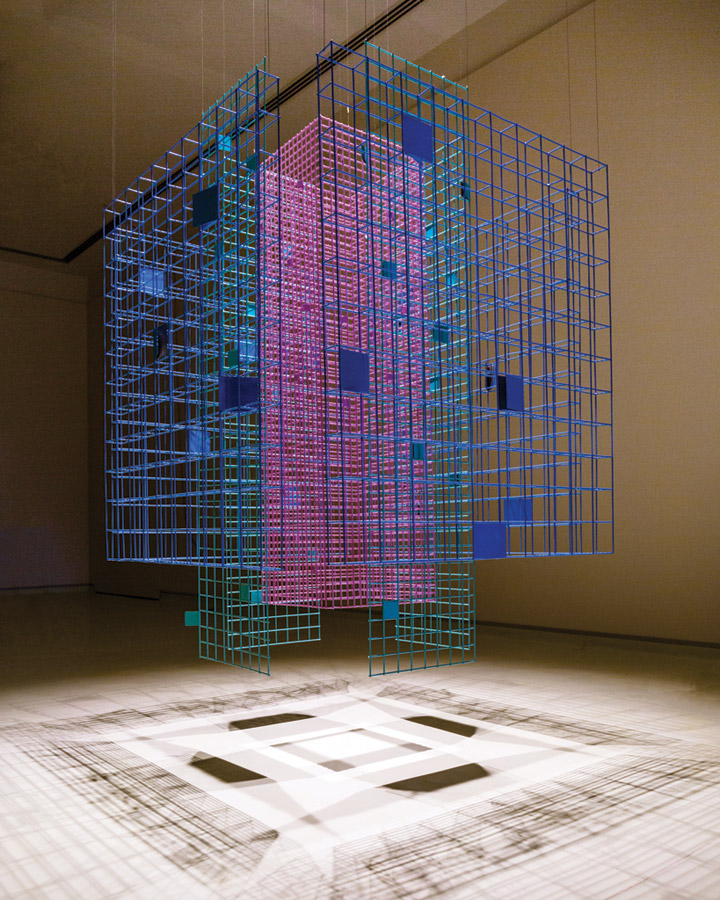 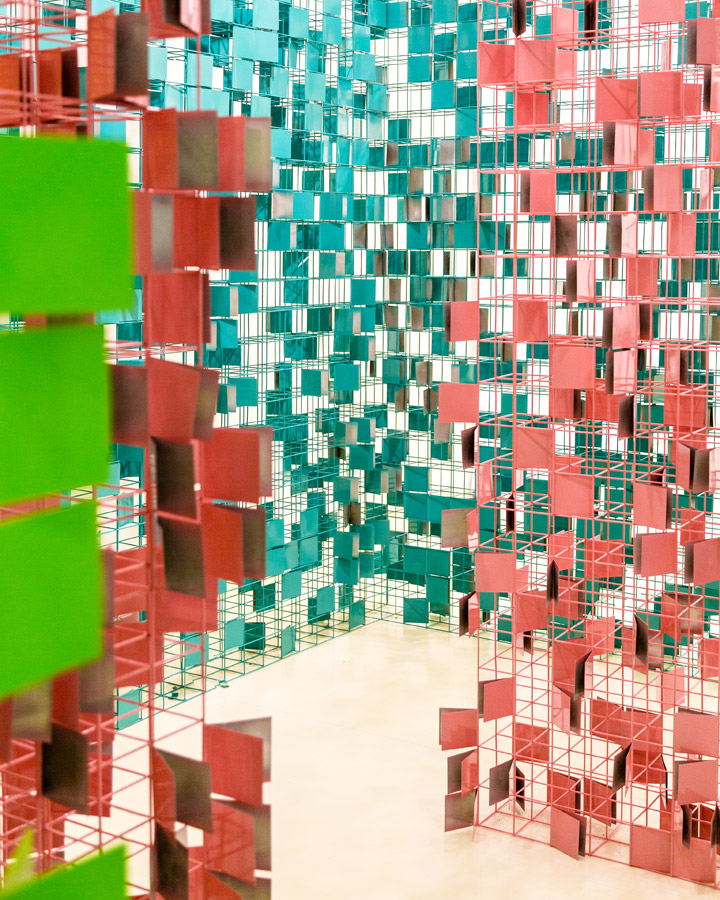 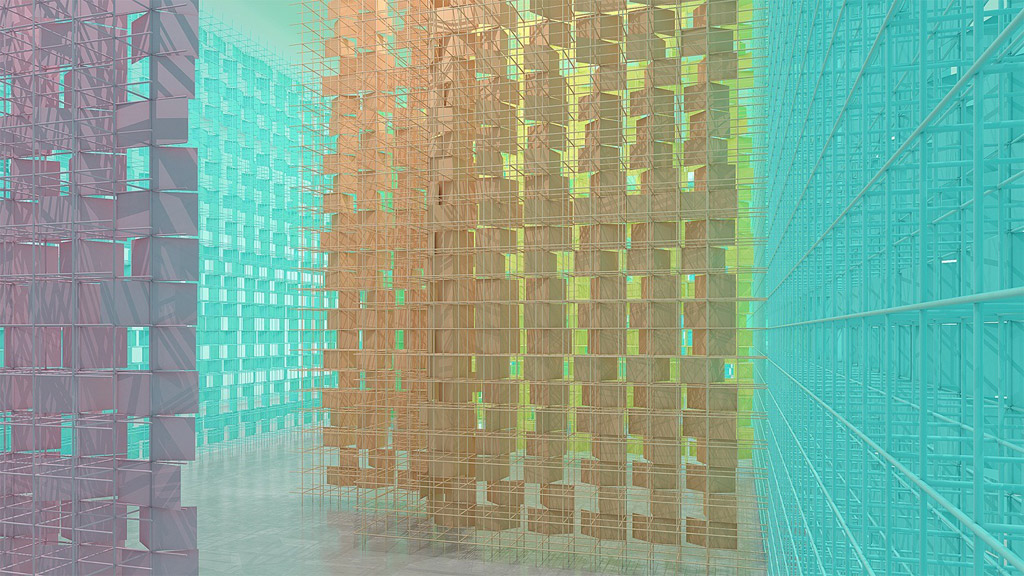 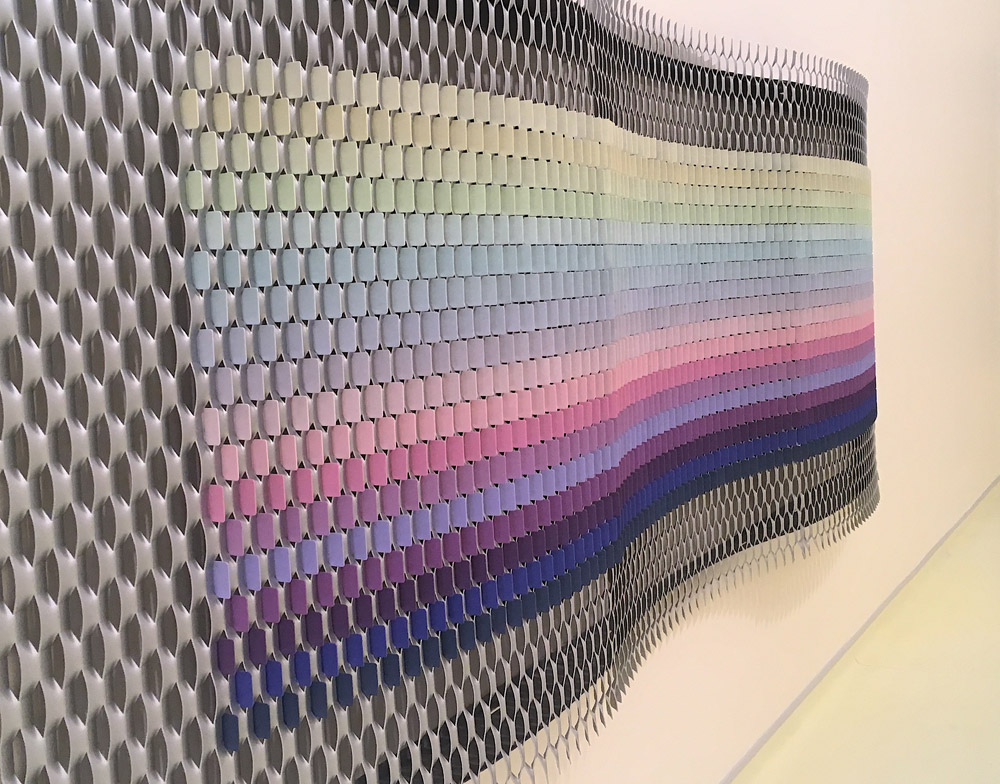 Presented and curated by Eva McGaw and Tatiana Palinkasev

In recent years, Rashid has experimented with metal surfaces, creating openings in his aluminium wall works and revealing the intimate space behind the surface, usually kept out of view. Penumbra takes this approach a step further, exploring changes in spatial experience depending on the viewer's position.

Upon entering the first exhibition space, the audience encounters convex wall works adorned with colourful flaps that suggest a feeling of movement. Rashid refers to the wall-mounted aluminium pieces, whose intricate patterns are based on complex mathematical geometric design, as 'parametric sculptures.' In the centre of the room, three-tiered columns wreathed with geometric flaps are suspended from the ceiling, drawing the viewer closer. There is tension created between the vibrant and ornate steel grids and the calmness of the voids within, just out of reach of the viewer in a realm of semi-privacy.

In the second exhibition space, the viewer is confronted with a colourful maze, a colossal grid structure that reimagines the shapes and tones of an urban environment, and explores architecture, city planning and memories. Rashid comments: 'I was inspired by winding narrow alleyways and traditional architecture. I would like the audience to experience the maze as a conceptual entity - a spiritual journey with no fixed destination.'" 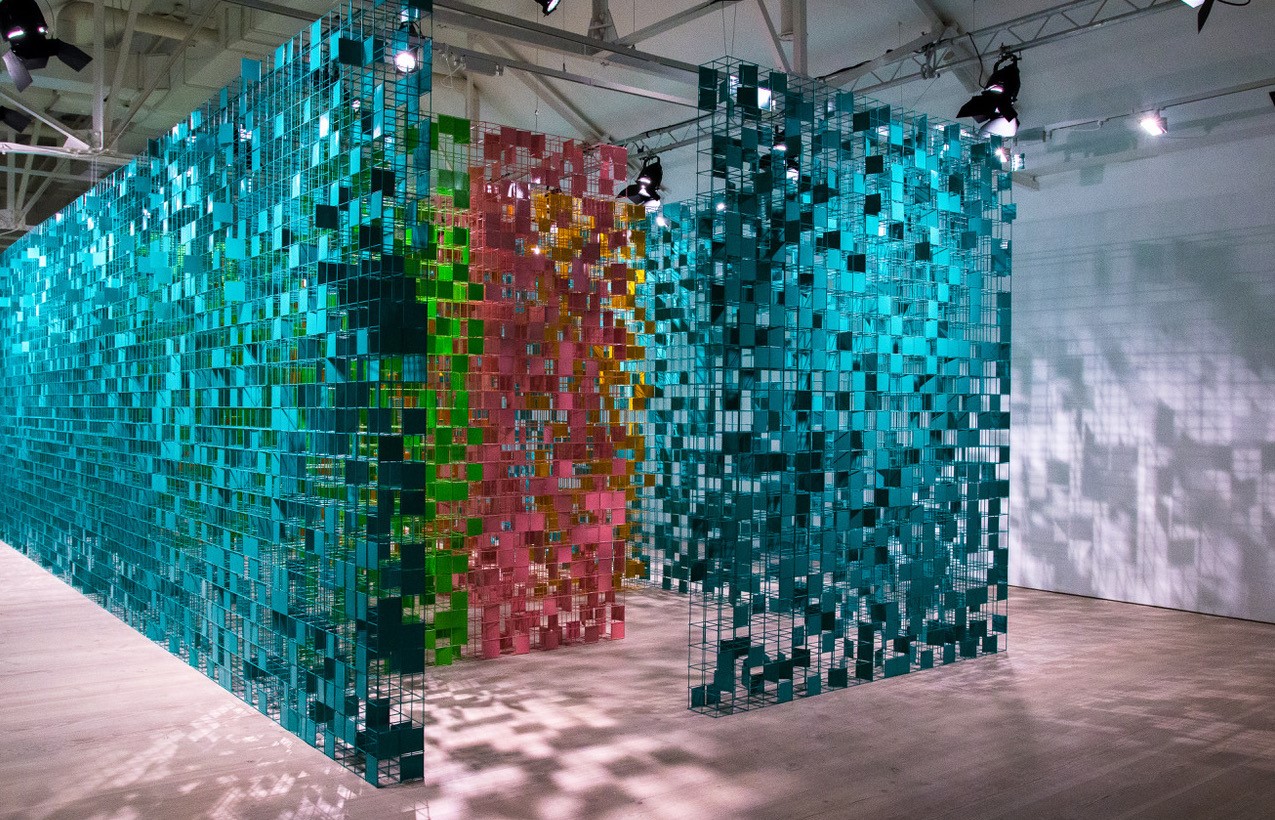 Rashid Khalifa (b. 1952) began painting at the age of 16 and had his first exhibition at the Dilmun Hotel, Bahrain in 1970. He travelled to the UK in 1972 where he attended the Brighton and Hastings Art College in Sussex and trained in Arts and Design.

Rashid's artistic practice has evolved over time: from landscapes in the 70s and early 80s, to merging elements of his figurative and abstract work in the late 80s, progression towards abstraction and experimenting with the 'canvas' in the 90s, and recent mirror-like chrome and high gloss lacquer pieces

About Eva McGaw and Tatiana Palinkasev

Eva is an entrepreneur with a special focus on business development and has been actively involved in the world of arts since the early 1990's. She pursued her passion by supporting Eastern European artists and by commissioning and producing exhibitions. She has lived in the Middle East for over 17 years where she was appointed special representative for Sotheby's.

Tatiana began her career at Christie's Auction House in London and worked in their Madrid and Rome offices where she gained her understanding and experience of the international art market, private and public collections and auction house business. After valuable experience at Christie's internationally, Tatiana co-founded Callisto Fine Arts Consultancy focusing on private clients, curatorship and exhibitions.

Eva and Tatiana together established "Metamorphosis Art Projects" where they produce and curate art exhibitions with a special edge. They create extraordinary experiences to motivate artists in developing new forms of expression, helping them to communicate their innermost beliefs and convictions and to inspire their audience. Interaction and inspiration is the key element in their exhibitions.

For more information on how we store and use your data please view our privacy policy here. You can unsubscribe from our newsletters at any time by clicking on the links below the emails we send you.

Sorry, an error occurred while registering your details in our database. Please try again.